What is Music Preparation?

Music preparation, or copying, is quite simply, preparing written music for performance or publication. The latter is often referred to as engraving.

Before the advent of the now-ubiquitious personal computer, music preparation was quite laborious. Music for performances was copied by hand on manuscript papers using pen and ink usually, but sometimes it would just be notated out in pencil. Engraving was even more labor-intensive using specialized tools that basically etched on metal templates before going to the printer.

In the late 80's and early 90's computers and software began making the process far less difficult and time-consuming. Although early software entries at times made it seem like it was more difficult than doing it by hand. By the mid-90's software was getting more and more usable, productive, and user-friendly. Today, most copyists wonder how they could ever have done it any other way.

Many music notation software entries have come and gone over the years. The market for this software is small and somewhat of a niche for developers. So, unlike other software titles for other uses, it isn't easy to bring a piece of software to market, continue to develop and support it, and turn a profit at the same time.

Over the years, programs like Score, Encore, Composer, and others have come and gone. Today, there are two primary titles, Finale and Sibelius. There is also a newer entry, Dorico, which was started and developed by the former design team at Sibelius. All are written for the PC and Mac platforms and all continue to be developed, adding new features and occasionally streamlining and improving old ones. All music notation software offer the ability to create simple to complex scores, generate the scores and parts for printing, and all can play back compositions using instrument samples and sounds. True musical realism is fleeting at best in these programs, even though sample libraries continue to improve their sound qualities. Still the reality is that they will never replace live musicians.

ThomaStudios uses Finale for all of its music preparation work. There was a time when Sibelius was used here, but it quickly became obvious that Sibelius was anything but a professional level music preparation application. For too many critical compromises were necessary to even come close to professional-level music preparation, especially for large orchestral scores to be performed. More modern notation conventions were also difficult if not completely impossible. ThomaStudios has been using Finale since 1989 and is extremely competent and well-versed in all facets of its capabilities. In fact, JD taught classes in Finale in the mid-90's at the UCLA Mac lab.

ThomaStudios recently installed Dorico and is currently evaluating its feasibility for use going forward.

While it's tempting to get into the pros and cons of all the various music notation programs, let it suffice to just say they all have their own strengths and weaknesses (some of them downright maddening!). We'll leave it at that for this space.


An excellent resource for combatting spam on your site's email is available here:
MX Guarddog 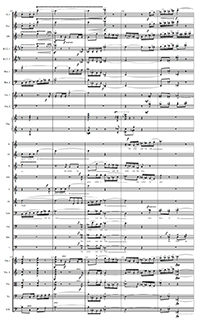